A gathering of about 50 people celebrated the placing of the Blue Plaque on Talbot House, Castle Street. Those who worked to make this day possible are shown below. 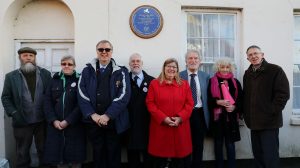 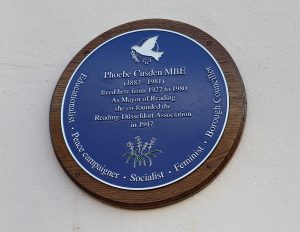 The Civic Society were very pleased to become involved in the project to raise a plaque to Phoebe Cusden at Talbot House, 55 Castle Street, her family home for over 50 years.  Initially we were approached by Kerry Renshaw for assistance with preparing the Listed Building Consent application which was required, but soon became further involved, especially as we knew that Phoebe had been on the committee of the Reading and District Civic Society in 1945.  This early Civic Society paved the way for the current one established in 1962.

For many years we ran a Churches Tour in September, organised by Rodney Oliver.  in 2014 we paused this for a couple of years, restarting in 2016.

In 2017 we visited three small village churches in the Newbury area;  Wickham, East Shefford and Avington.  The event is reported in the Winter 2017 newsletter. 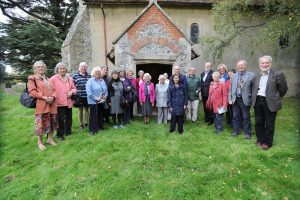 On a very cold and blustery Sunday Dr Margaret Simons led two walks for the Society on the 4th day of Heritage Open Days.  To celebrate the 50th Anniversary of the establishment of Conservation Areas these covered the town’s two central Conservation Areas, though we stretched the boundaries a little. Group photos are below.  There were 18 people on the walk from the Maiwand Lion and  19 on the walk from St Mary’s. My thanks to all who stuck with the weather.

The Walk from the Maiwand Lion. 10:30am Sunday 10th September. 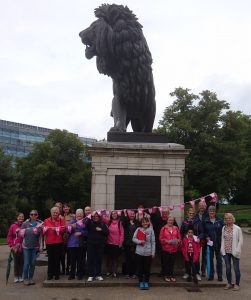 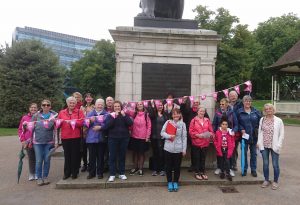 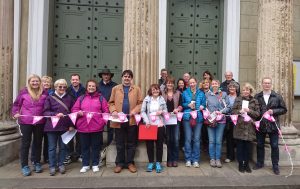 Members of the Society were welcomed by CEO Caroline Kay and members of the Architectural and Planning Committee to hear about Trust and aspects of Bath’s historic environment, touching on planning, major sites, conservation and other issues.   The trust is also working with other voluntary groups to update the Conservation Area Appraisal for Bath.  Society members then took the opportunity to explore Bath. The visit was fully reported in the Summer 2017 newsletter.

The image below shows society members with the BPT

On 16th June Matt Rodda,  MP for Reading East,  (Centre below) cheered off the first of four walks of Reading’s centre of town Conservation Areas.  ITV Meridian were there to record the event ITV Meridian News report as was BBC Radio Berkshire.  A total of  52 people took part in the walks. 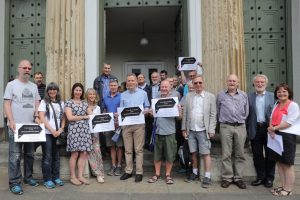 In the afternoon the second walk started from the Maiwand Lion. 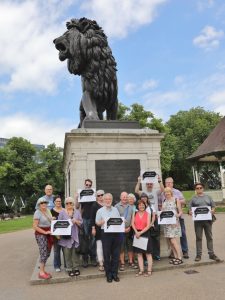 The same walks were also held on Sunday 18th June.

In 2017 we were one of 6 Societies presented with Civic Voice’s Civic Day Award.

The award was given for the work carried out in Reading during 2017 to raise awareness and appreciation of Conservation Areas during the 50th anniversary year of CAs, the main theme of Civic Voice’s national activities in 2017.

Image Evelyn Williams. It is understood work will be complete next week. Plans include reconnecting the water to fill the fountain. When it was restored in 1990 water flowed for a couple of years but idiots blocked it with gum and other stuff.