Further details of the planning application may be  – Major Development Sites

Some 45 people attended the evening, a mix of society members and people who had seen the event advertised in the HODs leaflet.  Mr and Mrs Kruse who have just arrived to live in Reading from Birmingham, Alabama, attended the event gaining their first taste of exploring Reading’s Heritage.

Haslams posted details of the event, and that it was a “Sell out” on their TV Screens:- 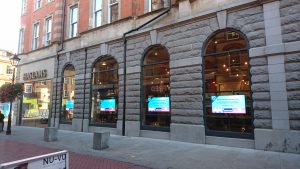 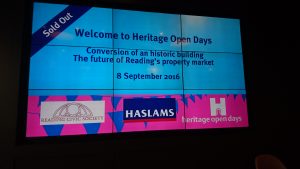 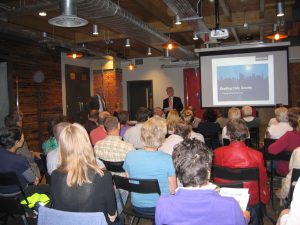 The event started with an explanation by Haslams Managing Director, Steve Woodford, about their journey to establish their stunning new offices and the History of Haslams itself, aided by historical images followed by a question and answer session.   Martin Shearn then described some of the trends in the Reading property market and what can influence them.  This was also followed by a Q+A session.  The discussions were supported by Claire Pulleyn (Market Analyst),  Paul Hayhow and Mike Shearn (Head of New Homes)  from Haslams Estate Agents and Steven Smith, Partner of Haslams Chartered Surveyors.

We are very appreciative of Steve Woodford and the Haslams team for making this event possible in this very special building and in a great space.

Image Evelyn Williams. It is understood work will be complete next week. Plans include reconnecting the water to fill the fountain. When it was restored in 1990 water flowed for a couple of years but idiots blocked it with gum and other stuff.